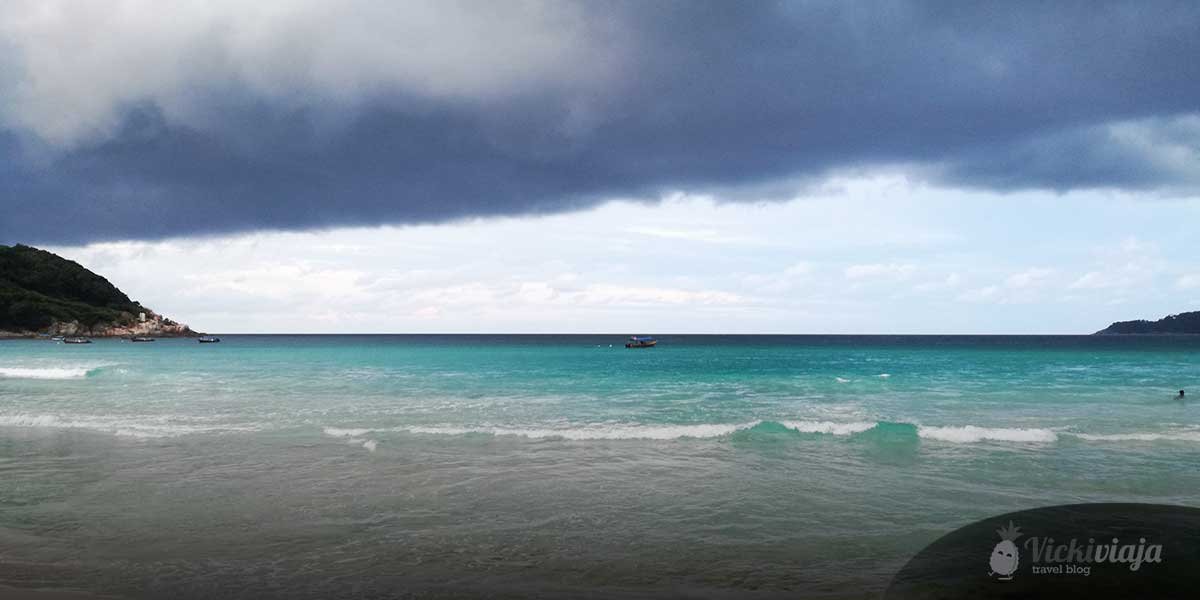 If you have visited this blog before you probably have seen that we’ve have spent some months in Southeast Asia last year. Since we traveled from Spring to Winter (European Seasons), we actually spent most of our time there during the rainy season. Because of our itinerary we’ve even kind of followed the rain on its way through Southeast Asia.

Even though it might sound like we are absolute fans of rain (we are not) it was actually more of a coincidence that we traveled the complete six months during the rainy season. But while doing so, we realized that there are some benefits of the rainy season that we didn’t think about beforehand.

In this article, you can find out which benefits I am talking about.

When is the Rainy Season in Southeast Asia?

Singapore: There is going to be rain throughout the whole year, but most of it usually between November – January

Indonesia: November – March (Differences in the areas due to the size of the country)

Traveling in Southeast Asia during the rainy season – The Benefits

Obviously, most people try to avoid the rainy season when planning their trip to Southeast Asia as much as possible. Therefore, you will find much fewer tourists during the rainy season.

Since there are fewer tourists, the attractions throughout the countries are way less crowded than in high-season. That means that you won’t have to stand in line as much as you might be used to from dry-season. Fewer people are going to accidentally bump into you and even fewer people are ruining your pictures by walking into it.

As I just mentioned there will be way fewer tourists during the rainy season. This fact also causes another huge benefit. It makes you a lot more flexible. Since there are fewer travelers, the accommodations usually aren’t fully booked. That means you can just choose your accommodation on arrival and don’t have to book in advance. This way, you can decide where and when to go much more spontaneously.

Moreover, when choosing your accommodation on-site, you are able to have a look at your room before booking and know beforehand what you are paying for.

If you have compared prices of accommodation in Southeast Asia during the rainy season and the high-season you have most probably realized that there can be extreme differences between those two seasons. Especially, on islands and in beach areas, the prices can be up to 5 times higher during high-season.

An example: In the South of Thailand (Koh Lipe), we stayed in a bungalow near the beach and paid around $15 per night. Just out of curiosity, I checked some month later (during the high season) the prices for the same bungalow online. And it turns out that they are charging during high season more than $60 per night. Quite a difference, huh?

During the rainy season, you can not only save money by choosing the cheapest accommodation, but you can as well enjoy some luxury for way less money.

When doing a short trip, most people usually rather spend a little bit more money and don’t take any risk regarding the weather. But if you travel for a longer time, traveling during the rainy season can definitely make a big impact on your travel budget and helps you saving a lot of money.

But not only the prices on-site are usually way more affordable during rainy season but also the flights to Southeast Asia are often pretty cheap. As always, you should compare prices and book at the right time. If you want to know more about how to find the cheapest budget flights check my post about that here.

It doesn’t rain all around the clock

Just because it is rainy season it doesn’t mean that it is raining for months without a break.

Especially for Early Birds, rainy season probably won’t even make that much of a difference as most of the time it just starts raining in the afternoon. Therefore, you can spend the whole morning outside and enjoy the sun.

Actually, on many days, it doesn’t even rain at all or just for a short time, which means, you can as well do day-trips. The best is to check with locals or your accommodation about weather trends.

Deep green rice fields in the North of Thailand, amazing waterfalls, that are full of water during rainy season. And don’t let me get started with all those delicious fruits and beautiful plants all around Southeast Asia… The rain truly has its benefits.

All the time when I read reviews about the gorgeous waterfalls we visited, people complain that they are almost dried out during high-season.

Another, for us, unfortgettable thing was the formation of the clouds short before it starts to rain. I have never seen anything like that before. Obviously, here in Spain it also rains from time to time, but the sky just never looks that impressive.

Some of the boat tours usually take much longer during the high-season or sometimes, aren’t even possible at all, since the lakes and rivers don’t have enough water. An example of that is the Boat Tour from Battambang to Siem Reap we took during the rainy season.

If you travel during the rainy season or high-season, you should never go without a travel insurance. You simply never know what’s going to happen during your trip.

Every day, in forums I read people asking whether an insurance is really necessary. And the answer is: Yes, yes and yes!

Just check with your insurance company or trust the most popular insurance for travelers: World Nomads.

Everything packed for Southeast Asia?

Have you been to Southeast Asia during the rainy season? Did I miss any benefits? Let me know in the comments below!