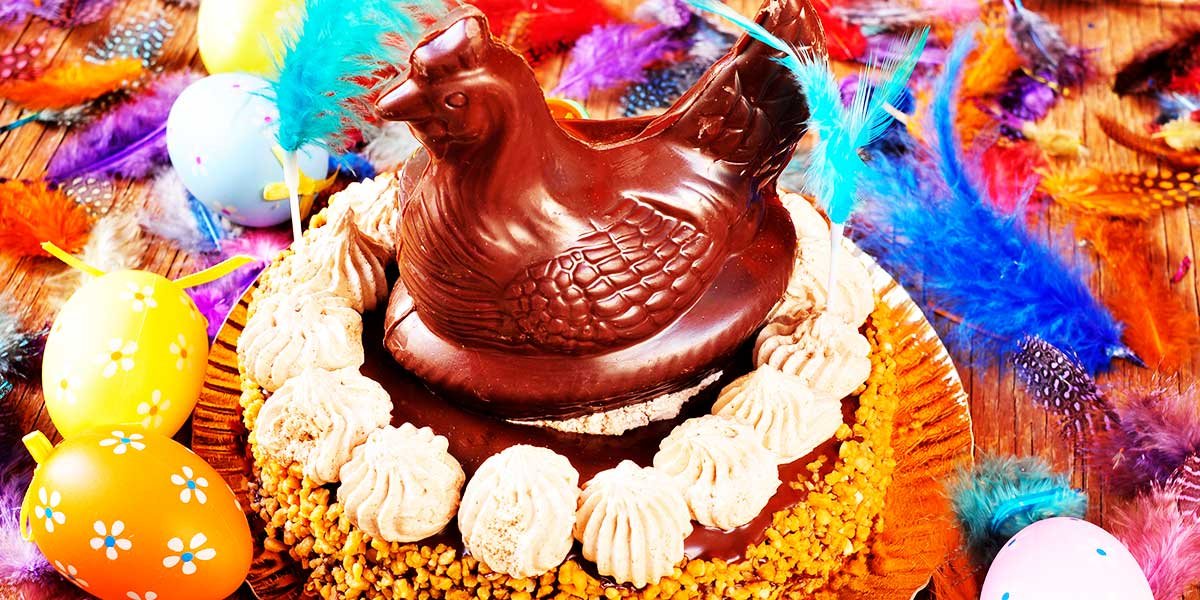 Like in other Western countries, Easter in Spain is also associated with numerous customs, traditions, and events. While most countries focus mainly on the Easter weekend, in some parts of Spain, the entire Easter Week, the so-called Semana Santa (“The Holy Week” in Spain), is celebrated in a big way.

But how do people actually celebrate Semana Santa in Spain? After I was able to experience some Easter celebrations in Spain and spend them with Eduardo’s family, I would like to introduce you to some Spanish Easter traditions and customs as well as delicious Spanish Easter foods and sweets.

As a predominantly Catholic country, Easter is one of Spain’s most important religious festivals. Just like in other countries celebrating Easter, the Easter weekend has a changing date and takes place every year on the Sunday and Monday after the first full moon after the beginning of spring. Accordingly, it is usually celebrated between the end of March and mid-April.

Easter is called Pascua in Spanish, which is derived from the Hebrew Pesach.

Like in other Christian countries, we celebrate the resurrection of Christ during the Easter weekend.

In my country of origin, Germany, we associate Easter with the Easter bunny, who brings Easter eggs on the Easter weekend. But how is it like in Spain?

Although Easter bunnies and eggs are known and used as decoration, they are still rather untypical. Generally, gifts are rare and eggs are not painted either.

Even though our typical Easter traditions do not exist in Spain, there are also a lot of typical customs.

Similar to other Christian countries, the Spanish Easter week begins with Palm Sunday, Domingo de Ramos. On this day, many Spaniards start their day going to church.

Children, in particular, bring a palm branch with them on this day to have it blessed in church. This procedure recalls Jesus’ entry into Jerusalem, where the citizens greeted him with palm leaves.

While between Palm Sunday and Easter there are occasional parades, events, and other activities, the next important day is Good Friday, which in Spanish is called Viernes Santo “Holy Friday“.

Depending on the region, parades are usually held on these two important days of Holy Week, especially in Andalusia. Although each place likely has its own traditions and parade processes, many follow the same pattern:

First, the large cross is carried through the streets to commemorate the Passion of Christ. This is followed by the brotherhoods of Hermandades or Cofradías. These individual moves of the parade usually consist of the following elements:

First of all, during the parades, you can see the so-called Nazarenos. These are brothers dressed in long robes with pointed hoods (“caroza“), where usually only the eyes are visible. Depending on their position, they carry other things like candles or walk near the so-called pasos.

The most important part of the parade for many is the pasos. Pasos are table-like wooden constructions that are carried through the streets like a sort of stage.

The members of the Hermandades who are responsible for carrying the pasos are called costaleros. About 35-50 of them are needed to carry each paso, depending on its size.

Although a costalero may lift up to 100 kg, it is a real honor for many of them to help carry the pasos. However, to avoid too much effort, the bearers swap among themselves from time to time. Further protection is provided by a cotton cap (“costal”).

On the wooden tables, there are statues depicting the Passion of Jesus. Often the statues are decorated and carved out of wood and can therefore be quite heavy.

By the way, in Malaga, the large wooden constructions are called “Trono” (“Throne“).

Another element of the Easter parades is the so-called penitentes (“penitents“). They each carry a wooden cross on their shoulder and are usually dressed in long robes (tunics).

They also usually wear a hood, but unlike the Nazarenos, it does not rise up but falls backward.

In some parades, the penitentes also wear anklets or similar.

Statue of the Virgin Mary – Virgin

Each year, the processions are accompanied in a very classical way by musicians and musical chapels. Musically, the processions also differ depending on where they occur. However, there are often drums, mourning marches, horns, and trumpets.

Two of the most famous Easter parades can be found in Málaga and Seville. In Málaga, Easter is celebrated every year with an impressive military parade.

Depending on the place, there are also other traditions, such as the tradition of silence in Granada.

In Murcia, on the other hand, beans, hard-boiled eggs, candies, and other sweets are distributed during the parade by the Nazarenos

On the night from Good Friday to Saturday, a religious Easter mass is held, the Misa Solemne (“Solemn Mass”). The mass takes place according to the typical Catholic service schedule and, for many families, is part of the must-do program of every Easter.

Easter Sunday is usually a family day. Accordingly, there are plenty of typical treats that Spanish families enjoy every year at Easter.

In many regions of Spain, the entire family goes to Easter Mass on Easter morning. The Mona de Pascua, a traditional Easter cake, is eaten upon return. Following an old tradition, this is given by the godfather to the godchild and then eaten together.

In some regions of Spain, straw dolls are burned to represent Judas.

While Easter Sunday is usually spent with a close-knit family, many Spaniards get together with their extended family or friends on Easter Monday.

But also on this day, people eat and drink a lot together.

While there are different dishes for lunch in most families, the traditional dishes are mainly Spanish sweets and pastries. The most typical Easter dishes are considered to be lamb and fish.

More about food in Spain21 of the best Spanish dishes

The Mona de Pascua is a typical cake which Spanish families eat every year at Easter. Particularly popular, however, is it in the Spanish regions of Catalonia, Aragon, Valencia, Murcia and Castilla-La Mancha.

But some variations of the popular mona also exist in other regions of the country, such as the hornazo in Jaén or the bolla en Asturias.

Although Easter cake recipes vary by location and custom, the cakes are often decorated with chocolate figures or even toys. The Catalan version in particular is known for its fancy designs.

According to the old tradition, the cake is bought by the godfather for the godchild. Therefore, there are more and more cakes with popular cartoon or comic characters.

Traditionally, the Mona de Pascua was prepared with whole eggs, but this is not always the case today.

Another popular dessert at Easter is buñuelos de viento (cream puffs), balls of dough made with wheat flour, eggs and lard, then deep-fried in hot oil. They are called “de viento” (“wind“) because they swell and double in volume when deep fried.

It is said that this dessert is a Christian variation of bimuelos, deep-fried dumplings made of wheat flour that Sephardic Jews have been preparing since the tenth century during Hanukkah.

In addition to the classic with cream, the delicious balls are also served with other fillings such as jam, chocolate and other types of sweet cream.

This traditional dessert is also typical at Easter. It consists of soaking a slice of bread in milk, wine, or syrup, then dipping it in egg and frying it in oil. Next, you sprinkle it with sugar, honey, or molasses and a touch of cinnamon. It is basically the Spanish version of French toast.

There are very similar recipes that date back to the 4th century. It was widespread to dip the bread in milk and sweeten it in the Middle Ages. There are also recipes from the 14th century where the bread is dipped in egg, then fried, and finally sweetened.

Another typical Easter snack in Spain is the deep-fried Easter flowers. Contrary to what the name might suggest, however, these are not real flowers, but a kind of deep-fried egg cake with anise liqueur.

Outside of the Easter season, the deep-fried pastry in the shape of flowers is also popular at carnivals.

After mixing the dough, a flower-shaped metal mold is dipped into the mixture and then dipped into the hot oil. In this way, the typical flower shape of this pastry is created, which is especially loved by Spanish children.

FAQ about Easter celebration in Spain

When is Easter in Spain?

Just like in other Christian countries, the Easter weekend always takes place on the first weekend after the full moon after the beginning of spring (i.e. after Mar. 21st). Therefore, Easter is usually celebrated between the end of March and mid-April.

How do you say “Easter” in Spanish?

Easter is called “Pascua” in Spanish. It is believed that the word derives from the Hebrew ” Pessach “.

How do you wish someone a “Happy Easter” in Spanish?

In Spain, to wish someone a Happy Easter, they say “Felices Pascuas”.

How is Easter celebrated in Spain?

What are typical things to eat in Spain during Easter?

Especially popular dishes at Easter are lamb or fish. Sweet dishes such as mona de pascua, torrijas, and cream puffs are also popular at Easter.

Where do processions take place at Easter in Spain?

In fact, the Spanish Easter processions take place all over the country. They are most typical in the south of the country, especially in Andalusia.

Do you know any other typical Spanish Easter traditions? Make sure to let us know in the comments below!